Barkley and I had become lovely friends, sharing many hours together and becoming very close. I felt like he knew my feelings and I knew his. Sadly my beloved boy had cancer, and while we had done everything possible our vet said that it was just a matter of time. Our decision was to take him home and keep him as comfortable as possible for however long our sweet boy had. We had been taking daily walks for a while and as he became more ill I tried to shorten the walks to his needs, but still take him out several times a day to help increase his appetite and keep up his strength.

Our walks were something he and I both looked forward to. I would chatter away to him and he listened so patiently to me but all the while I could feel these walks were something even more to him.  I began to look at the world through his eyes and try to visualize what he was seeing. We were not just walking down a road; we were reminiscing and sharing who we were. We would walk and smell the air and look at the beauty that was around us in the simplest things, like the trees, a fallen leaf or wild flowers, the colors of the sky. I could tell that he was taking in all of the sights and smells and storing them in his memories. These walks became more of a reverence, a time of quiet thought. So I chattered less but tried to feel his thoughts. He began to stop more frequently and look off in the distance as though he could hear or see something that was beyond me.

As time went by our walks became shorter, he still wanted to go out but his strength would not allow him to go very far. I knew how much he loved his time outside though and so I continued to take him out even if we only went a few yards and just sat and looked around. There was something so soothing in being with this gentle creature and sharing this time with him.

Our last long walk was a lovely crisp day in November. We had already taken a couple of short walks earlier in the day and had not gone very far on either of them. I had thought of picking him up and carrying him because I could feel he had such a desire to go further, and it was breaking my heart that my lovely friend could not make the trek down the road anymore with me.  So this evening we sat out for what I thought would be just another short walk ending with us sitting and enjoying the evening fall around us a few short yards from our front yard.

As we left the driveway he began to walk with a new-found vigor and energy that he had not shown in a few weeks. I was amazed and excited to see him so full of energy. I had to greatly increase my pace to keep up with him. We began down our road and I chatted with enthusiasm to him, thinking that he was feeling much better…but I soon realized that he was really deep in thought and on a quest. I became quiet and tears welled up in my eyes, my sweet boy was taking his last walk and he knew it.

There was something so very tender and beautiful in that moment and no words were needed. I could feel his spirit as if he were talking to me. He had such great strength and absolutely no fear of leaving this earth but just wanted to enjoy the most important things in life one final time so that he could carry them with him forever. As we neared the spot that looked over the creek he became even more intense as if gathering in these sites were the most important things in life. We neared the creek and he sat down and stared off over the water. I sat down beside him and put my arm around him and we just sat and listened, looked and breathed in the evening air.

I could feel he was deep in thoughts of past times and his memories. He was very content. Sharing this with him was so spiritual. The sun was disappearing behind the hills and the air was crisp with the scents of fall. All my thoughts of what needed to be done at home, faded away as I realized the most important thing at that moment was just sitting with him and sharing this very special time.  As twilight approached and the chill in the air enveloped us, all sounds around us faded away and the quiet peace engulfed us like the wings of an angel.

We sat there quite a while, until he finally stirred and looked up at me and I could almost hear him say thank you. I hugged him tightly and stroked his fur. Tears fell from my eyes as I thanked him and kissed his sweet head. For I was the one who needed to give thanks, he had reminded me of what is truly important. We finally rose and turned to head home, as we strolled back with the darkness creeping up and the stars beginning to twinkle off in the horizon, I knew the sweet memory of this walk would stay with me forever.

That was our final walk, but it was the beginning of a journey, one that was shown to me by my lovely friend “Barkley”. 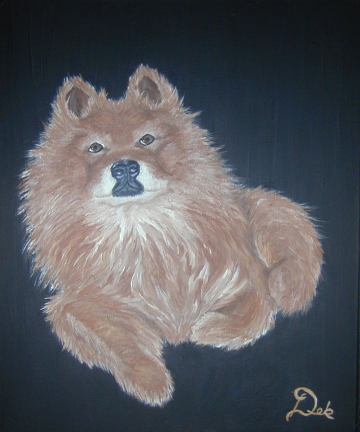